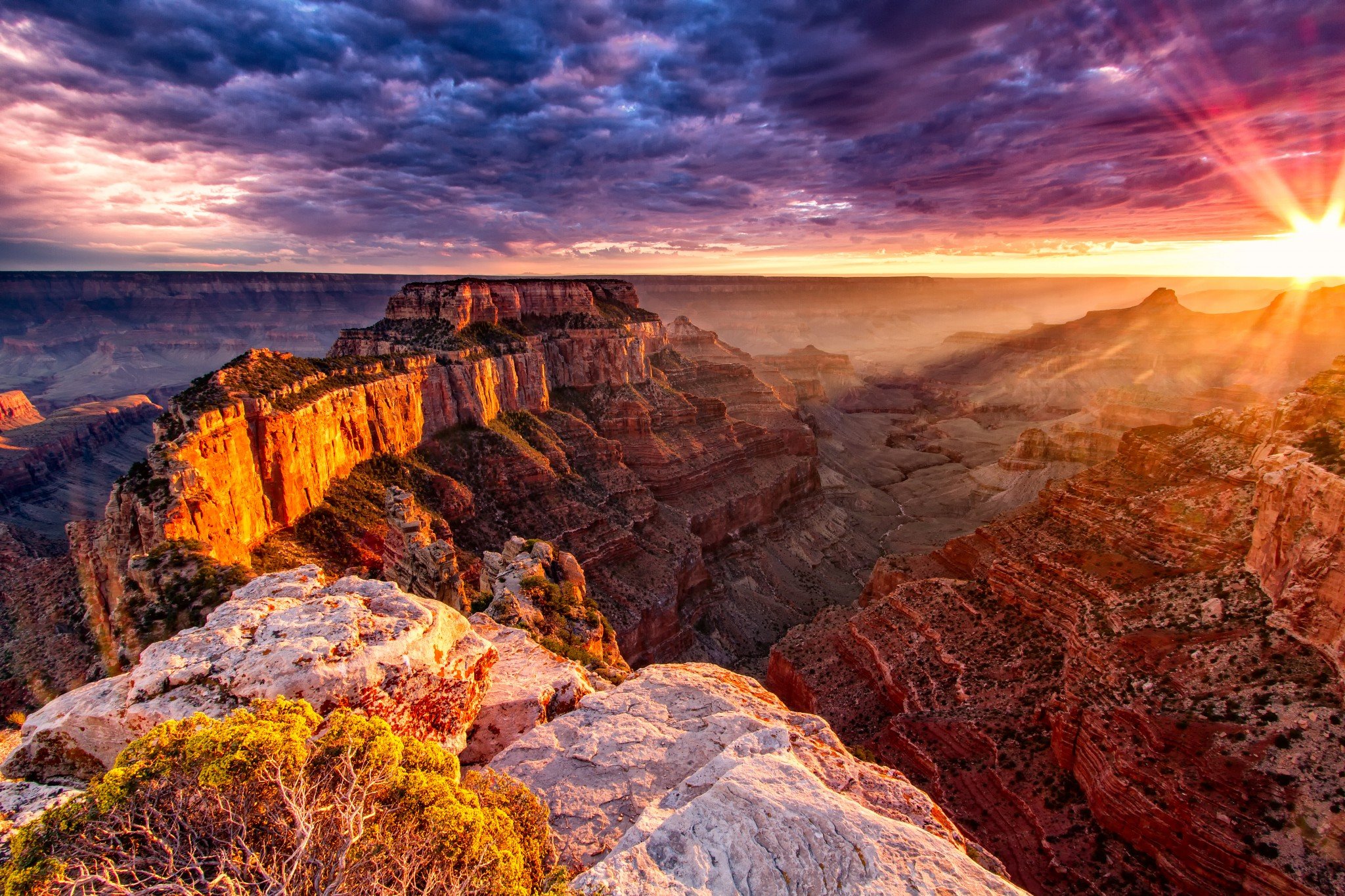 How to Find National Park Jobs in the U.S.A. 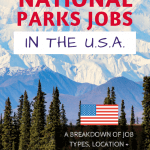 Imagine being paid to lead kayak tours amidst glaciers, or to serve drinks in a cozy cabin in a world renowned national park with birds chirping in the distance. It may sound like a dream, but for many, this is just another day in a seasonal national park job in the United States. Luckily, such work doesn’t have to be a fantasy – you can do it, too!

When I first began seeking seasonal jobs in national parks, I was unsure how to land such a position – I just knew it could be done and that I was going to do it. It was intimidating since I didn’t know what to look for in an employer or a job. Now with several seasons of national park work under my belt across several U.S. national parks, I’m here to simplify the job finding process for you. In this guide, I’ll explain exactly how to find seasonal national park work of all types, including hospitality, tourism, and park ranging, anywhere in United States national parks.

What types of national park jobs are available?

There are so many types of seasonal national park positions available, the main challenge will be narrowing your choices! Jobs range from housekeeping and bartending, to boat instructing and managing front desks. These jobs mainly vary by park and company – for instance, positions in Glacier Bay, Alaska will differ from those at the Grand Canyon in Arizona, so keep that in mind in the process. It can be overwhelming to find something that you like, want to do, or already have experience in, but don’t worry. Even if you’ve never done something, you might still get hired for it, so don’t be afraid to apply.

Possible jobs in (and around) national parks:

How much do seasonal workers make?

Pay varies by position and park location. Some places offer minimum wage while others can pay up to $15 USD per hour. Some jobs receive tips, including servers, busboys, baristas, and bellhops. These are likely to earn you more money, but again, it depends on the location too.

One thing to keep in mind is that if you return to a location for a second (or third, or fourth) season, you'll most likely get a pay raise. Your opportunities to move up from front desk agent to front desk lead or front desk supervisor, for example, are higher as well. Some places also have an end of season bonus, so if you complete your contract, you can receive additional pay. This varies by company and even location within the company.

How long are seasonal contracts?

This also varies by park. Places like Denali in Alaska or Glacier in Montana will have a shorter season than Lake Powell in Arizona and Utah. It can range from March or April to October or November if you're not studying. If you're just working as a summer job between semesters, summer contracts are usually sometime in May to late August. If you're working a winter job, contracts are typically from Thanksgiving (late November) to late March or early April. Depending on location and position, there may be some jobs that are year round. If that's something that interests you, definitely ask about that in an interview.

Now that we have a few things cleared up, let's get into the good stuff: how to find the national park jobs!

Decide where to work

Do you want to work on the East Coast? West Coast? Northwest? Southwest? Midwest? Alaska? Hawaii? Mountains? Desert? Beach? As you can see, there are a lot of areas to decide between here. Check the map below for a list of national parks in the United States by region.

To start, search broadly, then narrow down to areas that intrigue you. Consider factors such as how remote you want to be, and what kind of weather and nature you enjoy (or loathe). Does hot weather make you miserable? A summer job in Nevada may not be ideal. Does rainy weather make you gloomy? Springtime in Oregon may not be your best bet either. Remember, you’ll be working and living in the area. That doesn’t mean you should be afraid to apply outside of regions you’re contemplating – you could end up loving a place you didn’t initially think of.

A List of National Parks in the United States 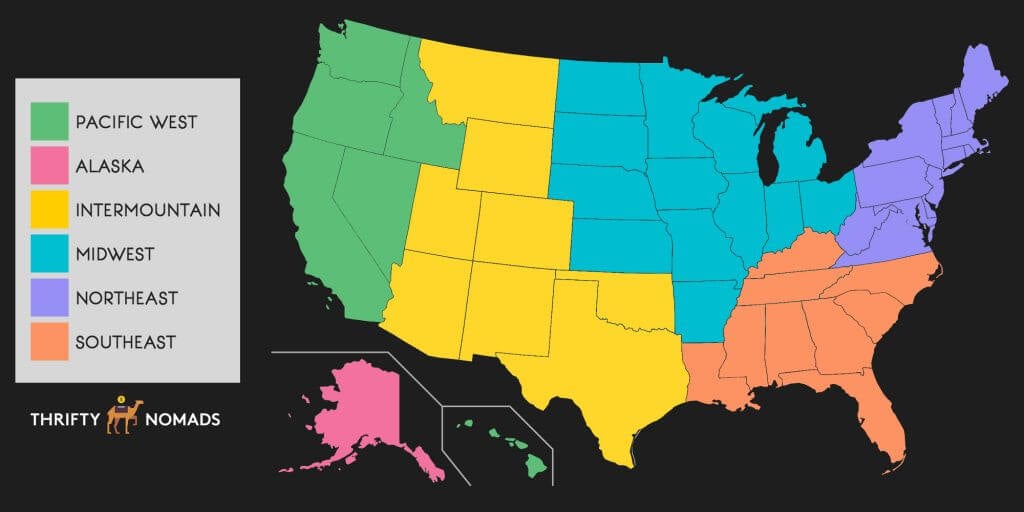 Decide what kind of job you want to do

While you may be tempted to only apply for jobs that you have experience in, consider broadening your horizons. When I first started looking at positions, I mainly applied for retail jobs in gift shops.  I didn't really want to do that, but it's what I was good at. Then I decided to just apply for whatever sounded fun; hostess, barista, hiking guide, concierge, you name it. I ended up as a front desk agent and I loved it. You can pick something you know well or you can just try something new.  Sometimes you might apply for one position and be offered something completely different – just keep an open mind.

Coolworks is the job hub for seasonal national park jobs. You can find pretty much everything here, well, almost everything. It's a great starting point for any search.  You can filter jobs by season, state, and park. You can also search by category like camps, administrative, guest services, food and beverage, and even internships. They also have a section for people currently hiring, which can be great if you decide you want to start this in the middle of a season. Sometimes people leave early and need to be replaced, so it's worth checking for work mid-season.

Search for resorts around the parks

Not every resort will be listed on Coolworks, so another way to find jobs is to head back to Google and search “resorts near Zion” or “resorts in (or near) Moab”. You can replace resorts with hotels, too and get similar results. Keep in mind not all parks have hotels or restaurants in them, like Arches. Then you just look for jobs in Moab or near the parks instead.

Get your resume ready and if you're really motivated, write a cover letter for one job that you can change and tailor to other jobs if they are necessary. You may wish to consider having your cover letter and resume professionally reviewed by an editing service. Bigger companies like Aramark and Xanterra don’t require a cover letter, but smaller companies may request it. Still, it doesn’t hurt to include one to demonstrate your enthusiasm for the job.

Once you have your resume and cover letter ready, apply for everything! You won't get a response from every employer, but you’ve got nothing to lose in applying.  Set aside an hour or two a day for a week and look for positions.  When you know where to look, it's easy to apply and you get faster the more that you do it. If you have somewhere you really want to work and can't find job information, send an email asking about future positions.  If you don't hear back from a place you really want to work, don't be afraid to reach out with a phone call or email to check your application status.

Also, keep in mind that some parks and resorts are much harder to get into than others. You might not get your dream job in Yosemite in the winter your first try, but don't let that stop you from trying again. Some places, like Yosemite, are open year round, but close a large portion of the park during winter.  When this happens, people that work there in the summer are more likely to transfer into winter positions. Don't be afraid to apply anyways, you still might get the job!

Factors to consider in a job and location

Now that you're armed with all the knowledge on seasonal national park jobs, you'll be ready for anything. I think it's something everyone should try once, even just for the experience of living in (or near) a national park. Living and being able to explore a national park anytime for months versus for a few hours passing through on a road trip is a once in a lifetime opportunity. So, get applying and have fun!