Is Hong Kong Still Safe for Travellers to Visit? 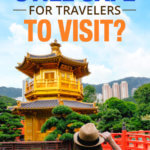 Since June last year, images of Hong Kong's tear gassed crowds, masked protestors, and shield-wielding police have flooded news outlets. As months have passed, unrest has risen, at times shutting down public transport, roads – even grounding flights. But why is this happening, and is Hong Kong still safe for travellers to visit?

Having just left this neon mega-city one month ago, we can confirm there is indeed political divide, but the city (as of December 2019) is currently safe to travel to. Of course the situation can change, and one must assess present happenings before visiting. That said, our local friends iterated that Western news outlets have projected a fairly sensationalist view. In reality, the protests are isolated, and are not continuously infiltrating this tantalising megacity.

We booked ourselves an extended layover in Hong Kong for free back in April, since we'd pass through the city en route to visit Canada for Christmas anyway. But as the protests gained traction, we questioned our decision. Our Hong Kong friends assured us there was no concern. We are now really glad we revisited one of our favourite neon cities.

Why are protests happening in Hong Kong?

Would-be travellers should get some basic context of the situation. Here's a very superficial overview of a complex, longstanding dilemma. For a more thorough review, check out this article and this article by VOX. In summary:

Hong Kong locals have made five demands to address the above (and other) issues, which we will cover next.

You may have heard about the protestors' five demands for China. The protestors have declared that they will not stop until these are met by the Chinese government. The demands include:

The protection of human rights and democracy are at the core of these demands. The bold movement to stand up against one of the world's super giant (and corrupt) nations resulted in the Hong Kong protestors being a nominated runner-up for Time Magazine's person of the year.

How are travellers affected by the protests?

Having visited Hong Kong three previous times, our impression on this trip was that the city was very quiet. We stayed at a spacious and cozy Airbnb near the mid-level escalators on Hong Kong Island (here's the exact listing), a trendy area with a blend of local and Western influence. The “must-see” temples and markets in this usually buzzing area were empty.

Besides vacant streets, tourist activities were dead (and discounted). Hong Kong Disneyland had heavily reduced tickets on Klook, and even its souvenir shops had sales. We walked onto completely line-free rides, a rarity for any Disney park. The only downside was reduced hours due to low volumes of customers, but we still had adequate time to do all the rides (some even twice).

Emptiness further extended to other activities like the double decker hop-on hop-off bus tours (which we loved for soaring through the towering neon district of Nathan Street). Tickets for the Peak Tram and its lookout* with sweeping city views were discounted and delightfully empty too.

*Thrifty tips: buy tickets in advance on Klook for a better rate. You can use your Octopus (transit) for pricier tickets to board the tram. You also don't need to pay for the roof lookout at the peak observation deck, simply go up the elevator adjacent to Gordon Ramsay's restaurant there's a free rooftop lookout area and even binoculars.

An eerie aspect of our visit was seeing spray-painted slogans on the city sidewalks, walls, and roads. The slogans breathe life into a cause that travelers likely feel disconnected from.

Now, an important notice: when returning to the airport for your departure, be prepared to show proof of an outbound flight to police (e-mailed tickets are fine). This is due to the fact that previous protests which have taken place at the airport. Police want to ensure that only those with outbound flights enter the airport (and likely to make a statement).

How to keep up-to-date on current protests

News sites, apps, social media, and local knowledge are the best ways to keep current on protest happenings. Here are recommended resources which our local friends informed us on: 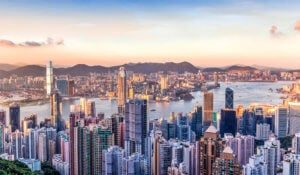 Staying safe in a nutshell: Tips for tourists from locals

Here is some travel advice based on our December 2019 visit. These tips are informed from both independent research and confirmed by our local Hong Kong friends: