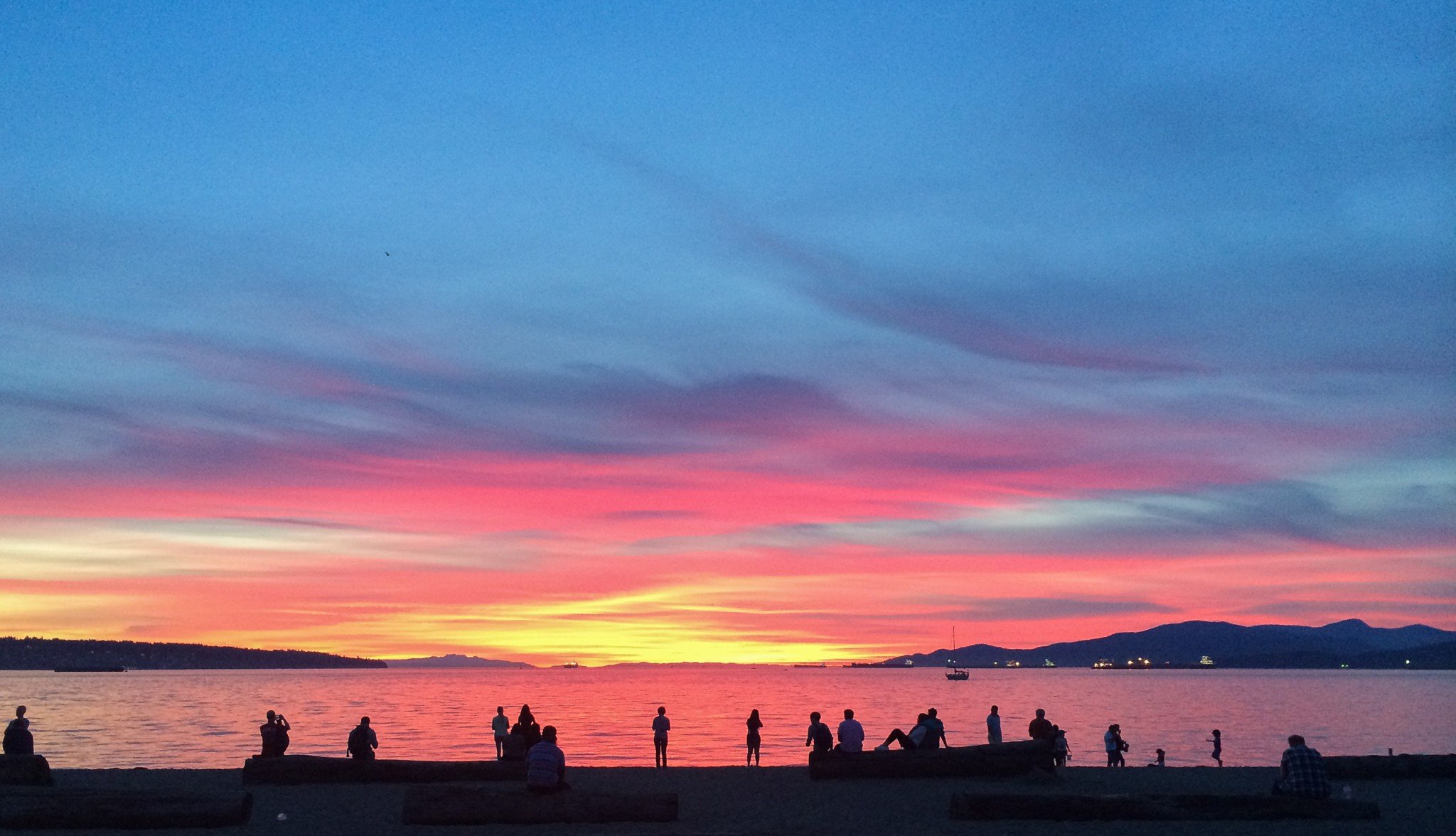 Ditching the Daily Grind: How We Abandoned The Ordinary For A Life of Travel 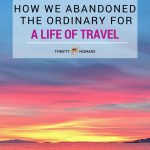 Have you ever looked at someone else's life and thought, “I wish that was me“? I know I used to. Mostly it would happen during our 12-day vacations, when we'd meet other travellers who were wandering aimlessly for months on end. As we'd board our plane home after those blink-and-you've-missed-it trips, I'd sit back and ponder their lives.

Dread sat heavy in my gut on those flights back. My mind would drift between the curiosity of what those travellers were doing now, and the anxieties of the impending chaos awaiting me at the children's hospital where I worked.

Over and over I'd wonder, How do people just leave their old lives? Where on earth does the money come from? How do they do it?!

I longed for the “special circumstances” that enabled others to travel in a way that I couldn't. I was nothing more than a little girl staring longingly in the pet shop window. The one and only thing I yearned for, was something I could never have.

Or so I thought.

It's been five years now since I've had that longing for a dream I was actively suppressing. Since 2013, we've lived abroad, backpacked the globe, and have spent two years living nomadically with no fixed home. In other words, we've taken a complete 180 from our previous life.

While our nomadic lifestyle seems dream-like, our life of travel actually has rather humble beginnings. I like to emphasize that, as I'm passionate to make it clear that you don't need to come from money to travel. No one handed us an inheritance, a cheque, or a dime to fund our lives. The one and only thing that made travel happen, was us.

This is our story of how we created a life of travel.

Travel for us began very late in life – much later than most. The first trip Ted and I ever took together was for our honeymoon, 7 years into our relationship. Before that, neither of us had travelled at all. Both being from single, low-income families, international or even in-country trips just weren't a part of our upbringings.

Fast forward to 2010 and we were planning our June wedding. In contemplating honeymoon destinations, we realized that Ted didn't even own a passport. Off he went to get his virgin, stampless booklet, so we could leave our home country of Canada together for the very first time.

The day after our wedding, we awoke bright eyed to board a flight for where else but Las Vegas. Yep – a week in Sin City was our first taste of what lay outside our concrete bubble. Unbeknownst to us, this quirky little place is where it would all begin.

I'll never forget the moments of newness as we embarked on that trip. It was exhilarating. Ted's nervousness at the turbulence on his first airplane ride, our splurge on two glasses of wine to simmer our certainties that we were going to crash and die (this is when I first discovered I have flight anxiety). As we began our descent, I gasped aloud at the view out the window. Amidst the dark silhouettes of the desert, it suddenly appeared: neon, blinking, Vegas.

Next came the usual awe that strikes anyone plopped into this erratic place for the first time. We crooned our necks in double-takes at Darth Vader, Elmo, and Elvises posing in the streets. We pointed out the gluttonously too good to be true (but indeed very true) all-you-can-eat deals, and plump security guards teetering by on segways. Early on we spotted the infamous zombie-like gamblers. Indeed, their palms remained fixed to slot handles at all hours of the night and day. Some of their undersides were lumpily bulked perhaps by adult diapers, allowing them to stay seated for hours at a time (or so I'd been told).

And then we took a day trip. But not just any day trip, the day trip where the travel bug first bit. Anxiously we hopped into a spanking new rental car. With nothing but hot desert roads before us and that perfectly pleasant new-car smell, we cranked up the tunes and smiled as we made our way to the Hoover Dam and Grand Canyon. 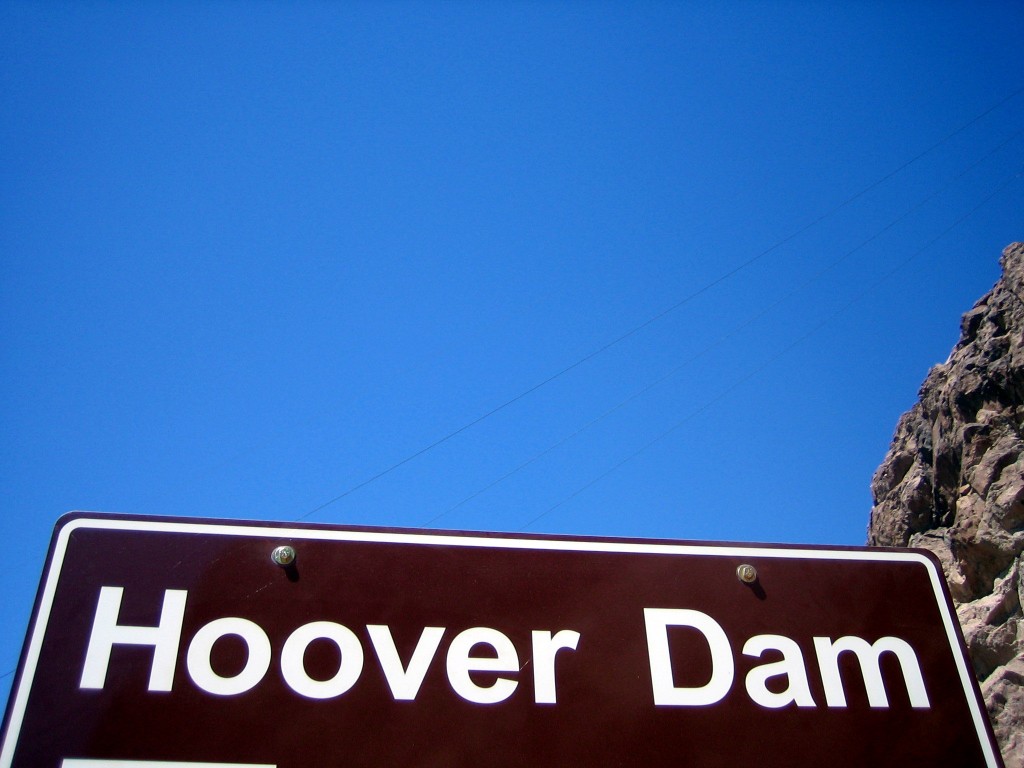 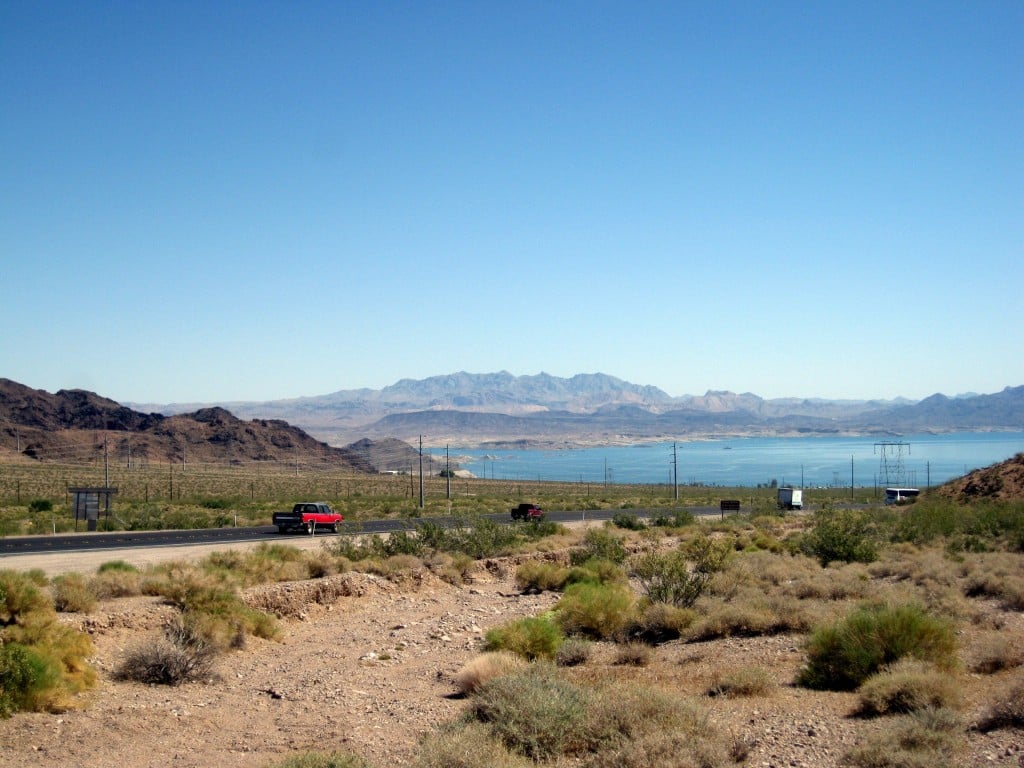 As Canadians used to about half a year of cold, wet greyness, nothing could have wowed our eyes more than those vibrant desert landscapes. Everything was foreign.

“TUMBLEWEED!!!” I shouted. “Oh my God, CACTUSES!!” I squealed, tapping on the passenger window while Ted tried to navigate amidst my distractions. We had never seen red dirt, barren lands, and of course, such grand canyons.

Special is not the right word to describe that day. Life-changing just sounds cliché – but really, that's what it all was. Life-changing.

Driving in the hot emptiness was the first time in my life I'd ever felt small. Sure, I'd contemplated the enormity of the universe from time to time, but really, I'd never felt like just a speck. I could appreciate the diversity of the earth beneath my feet, wrapping hundreds of thousands of miles around the world's curvy sphere. Some of it was cracked open into massive canyons like these, while other parts were dripping in waterfalls and mist-soaked rainforests. All over the globe, buzzing cities and dusty small towns were existing in alien landscapes like these, while my humdrum life continued.

In the shadowy desert blackness we drove back to Vegas that night. Some of that 2+ hour drive was spent in silence and sifting thoughts. I felt like I'd been dropped into an icy cold bucket of unfamiliarity. My bloated brain digested it all.

That was when it all began. Slowly. 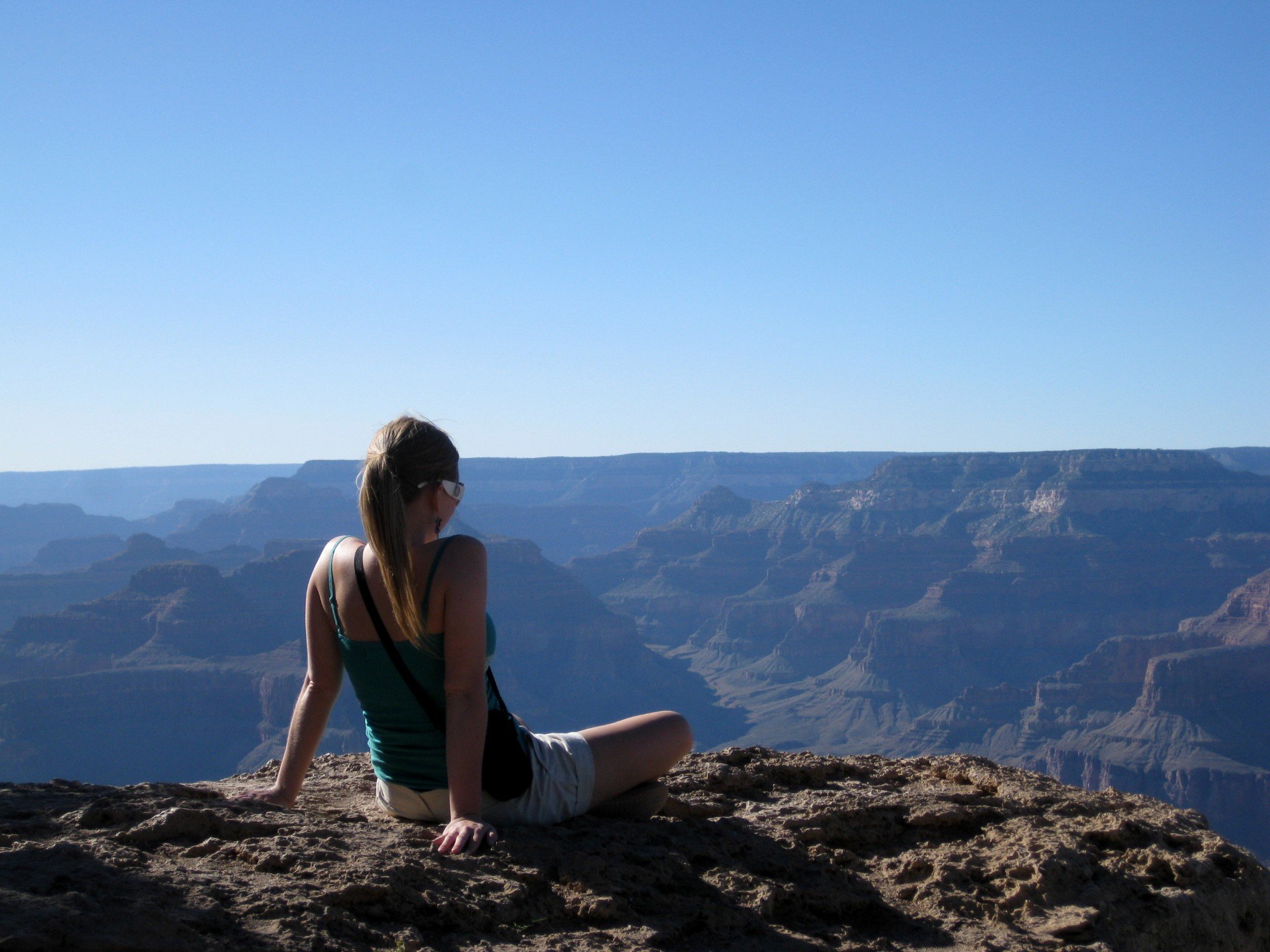 My stomach churned as a dollhouse-sized Toronto grew outside the airplane window. Our honeymoon had ended and we were on a red-eye flight home. With my suitcase in hand, I left from the airport straight to my first day of orientation. I was starting my new job – my dream job – as a pediatric nurse at The Hospital for Sick Children. From that moment on, we were vacuum-sucked back into what most call “the real world”.

Possessive as work stress was, I continued to replay the hauntingly beautiful landscapes we'd seen on our honeymoon. Excitedly, I put both our families through the hours-long torture of endless photo slideshows from our trip. Reliving each memory, each meal, and each moment only made me long to see more.

Though hardly any time passed since we returned, I inquired: when could we go away next?

In 6 months time, our work places told us.

Okay, I thought, I'll get planning!

And that is the pattern that ensued for the next two and a half years. Blurred months working multiple jobs – me teaching at a local university and nursing at the hospital, Ted developing apps and websites across employers. We feverishly day dreamt of the next place to explore.

It wasn't that our lives were at all uneventful or bad during this time. In fact, maybe if things had been glaringly horrible, we'd have left sooner. Life was good. And that made it all the more challenging to ask ourselves: do we continue this comfortable status quo of “good”?

Work continued to be emotionally and mentally draining; the continual confrontation with death was growing harder to ignore. At an acute care pediatric hospital, death and dying was an integral part of the job. Every now and then patients' parents would share with me their devastation over unanticipated loss. I never knew what to say, I just listened. Over time, I saw chronically ill children deteriorate in slow-motion, long before they'd had much of a chance to live. Some days, it was simply heartbreaking.

Slowly, thoughts of my own mortality began to swirl in my brain. A subtle questioning of our current path unfolded. I suppressed it, but the blatant dealings at work planted a desire of change in my mind (which I wrote on here). Regularly, I was reminded how lucky I was to be alive. Was I really taking advantage of that fact?

I knew the truth, but it was far easier to ignore. Addicted to travel, we continued globetrotting the only way we'd ever done it – on overpriced, ambitious 12-day trips each year. We saw Costa Rica, Italy, and New Zealand in the blink of an eye and the swift deflation of our wallets. With each vacation, I secretly hoped the travel itch would be soothed. We were on the assembly line of life after all, heading towards buying a condo, and then a baby sometime after that. So just when would this desire to travel subside already?

To my surprise, our annual trips had the opposite intended effect. Rather than satisfy our curiosity, exploring only made us thirst for more. With each holiday we'd meet long-term travellers, who were sad at our brief itineraries. A family in New Zealand couldn't believe we'd flown to the other side of the world for a mere 12 days.

Embarrassed, I attempted to explain the brief holiday time allotted in Canada. How the hell was everyone else doing this for so long? Don't these people have jobs, commitments, a life? More importantly, how could we do that? Such queries always stirred in my mind, until the moment we'd be hungrily swallowed up by the “real world” once more.

My days off were spent feeding my wanderlust from the seat of our couch. I'd flip through enormous Lonely Planet travel books, watching every Planet Earth, National Geographic, or Globe Trekker episode in existence, scribbling more places to my “to see” list. Gradually I realized that my growing list would be impossible to complete on annual holidays in our lifetime.

Travel had now become a swelling tumour in my brain. Work, boredom, travel books, and the unbearably long time between holidays only fed the disease further. I wanted out.

Then, along came the usual precursor to major life change – the unexpected.

Want to know the rest of the story? Continue Part 2 here.