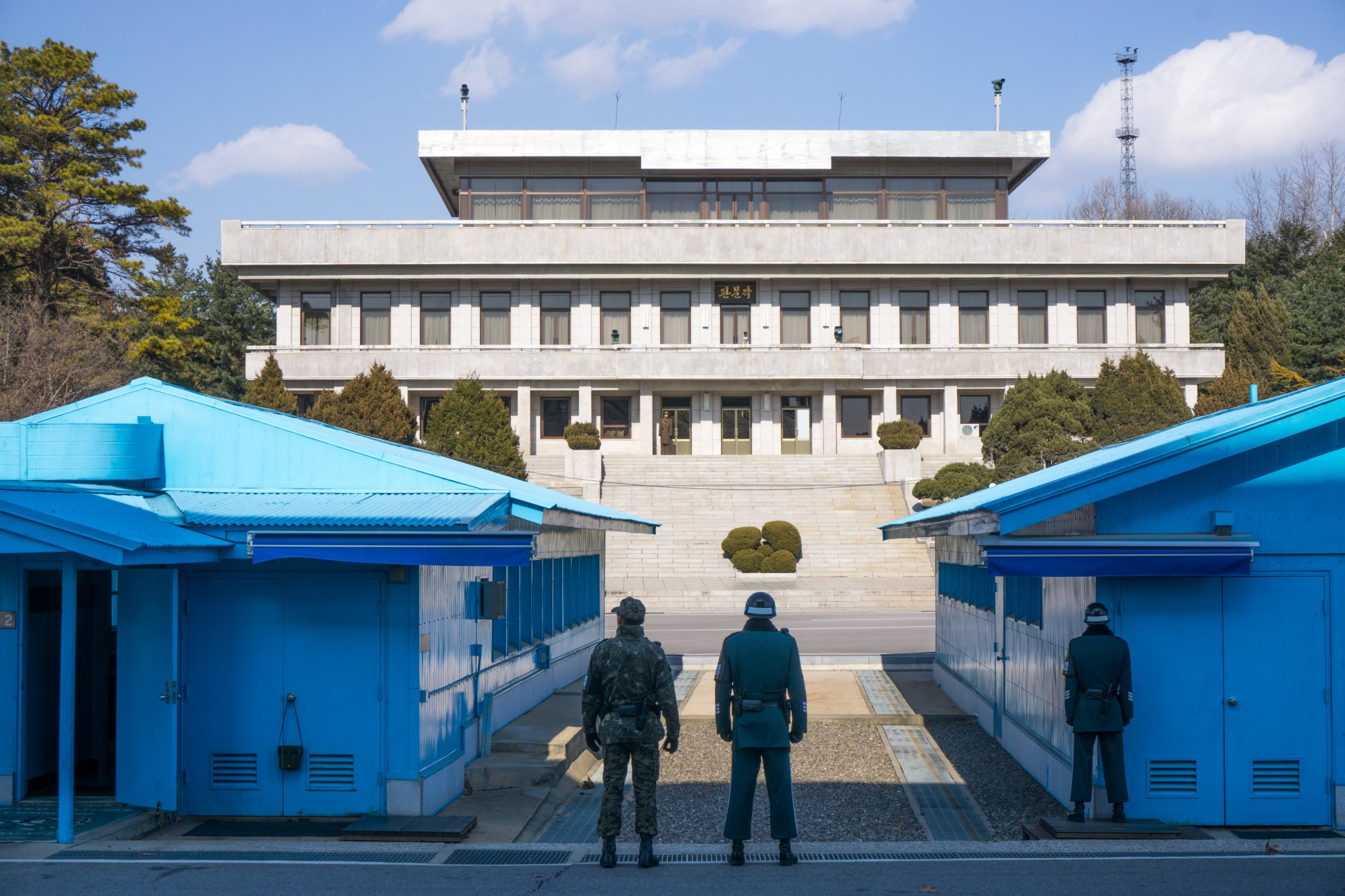 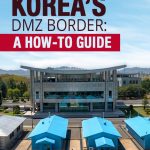 As controversial a place as North Korea is, it's swiftly gaining attention from the curious tourist eye. Our intrigue to see it was piqued during a visit to Seoul with friends. Having now taken the DMZ tour ourselves, this highly informative if not haunting experience is one we would highly recommend. So, if you've got guts and a desire to get a snippet into one of the most closed countries on earth, here's how to do it!

Getting there & where to stay

First, you need to get yourself to Seoul, which is the nearest major city to the DMZ border. South Korea is only reachable by flight, with most planes flying into Incheon International Airport. Use Skyscanner and search by entire month to see the cheapest dates to fly. Be sure to check our flight booking hacks here to get yourself the best price. And don't forget to book your airport transfer and a 4G Data SIM card before you land!

A fast way to get a big discount on your flight is to sign up for the Chase Sapphire Preferred credit card. This card offers a massive sign-up bonus of 60,000 bonus points (worth $750) after spending $4,000 in the first 3 months. United and Singapore Airlines are both partner airlines of this card, and both offer flights to Seoul, meaning you can convert your points to these airline loyalty programs, or just book directly through Chase Ultimate Rewards.

Seoul is a buzzing megacity with plenty of enticing accommodation options. There are plentiful AirBNBs and hotel selections, but be sure to reserve ahead in peak season. Some convenient neighbourhood options include Hongdae, Itaewon, Myeongdong, Gangnam, and Jamsil. Check TripAdvisor for more local tips and advice.

There is plenty to explore in Seoul itself, and a local guide can help ensure you catch the best of the best. Be sure to check out the Gyeongbok Palace & Temple, the cable car & battleship park, or grab the Seoul Pass, which grants free entry to over 40 attractions.

Step 1. Choose your points of interest

There are several companies that operate DMZ tours. As much as I despise group tours, you can only visit the DMZ with a tour, as it has restricted civilian access and requires a mandatory military escort.

No two tours are the same, but you should choose one based on your budget, customer reviews, and points of interest that are included. Tours can be browsed with reviews, prices, and instant confirmation through GetYourGuide and Viator. The main highlights to select from are as follows:

Located in Panmunjom, the JSA is the closest point a tourist can get to North Korea. At this spot, you'll have a chance to physically stand in North Korea itself and take a photo as proof (more on that below). This area is occupied by the South Korean and US military, and is complete with a gift shop selling original items from North Korea, including stamps, money, and wine (which in our experience tastes like nail polish remover and turpentine but hey, at least you can say you tried it).

One can safely view day-to-day life in North Korea without setting foot in the country at Mt Odu Observatory. Binoculars (free of charge) provide ultra zoomed up views of North Korea opposite the Han river below. On our visit we were able to see civilians walking around on the other side.

Scarily enough, around the time that the North and South were having peace talks, North Korea began digging underground tunnels to infiltrate the South. They were never completed, but were discovered in 1984. The longest tunnel is 1,082 metres. The 3rd tunnel is the closest to Seoul (only 44km away) and could move ~30,000 troops and artillery per hour.

This observatory offers binocular views of North Korea's fake town, Kijong-dong. The town was first built in the 1950's to lure South Koreans to defect and move across the border. From visual observations from the South, it has been uninhabited with windowless, incomplete buildings since its construction. 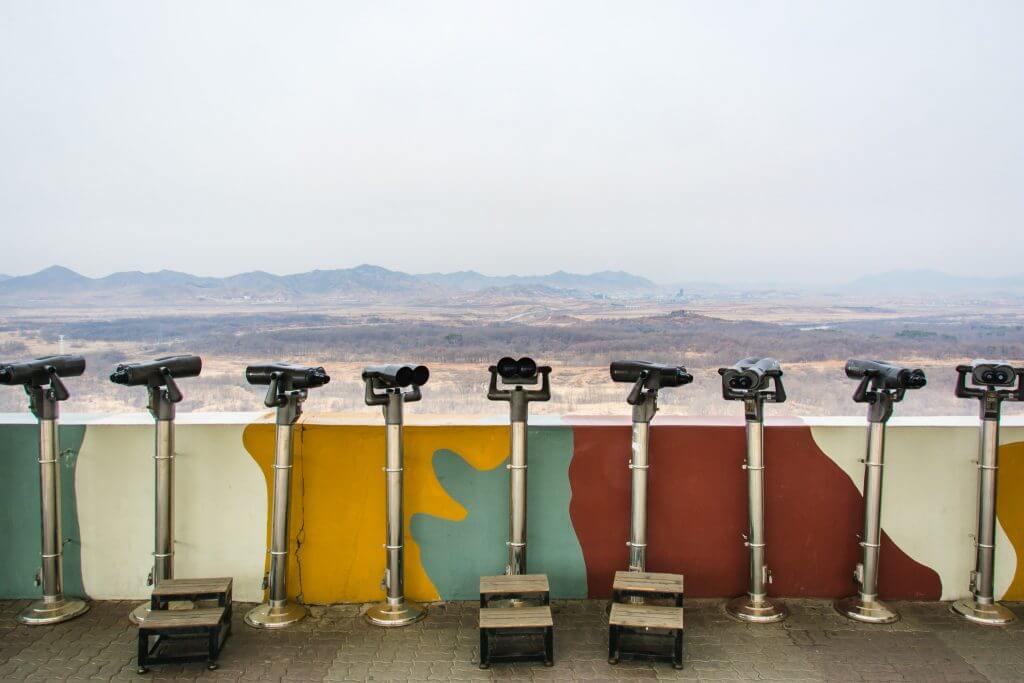 Dora Observatory is so named after Dorasan the mountain on which it sits. The nearest train station has a fully completed train line that runs to Pyongyang. Though the North cooperated in its completion, it was never used. It is hoped that when re-unification is reached, the train line will be used to connect the two Koreas.

The Freedom Bridge connects North and South Korea, though a massive barricade blocks entry to the connecting point over the river. If the two sides are ever connected, this bridge could be used to enter and exit North Korea.

Once you've decided on your must-see highlights (as listed above), you can select a tour.

There are traditional tour companies to choose from, which are listed at the end of this article along with prices and contact information, but it's much easier to book tours online with GetYourGuide and Viator. You pay in advance and get fast confirmation, so all you need to do is bring your voucher to the tour. There are reviews, photos, and videos that make choosing the right tour simple. The traditional companies require back and forth e-mail or phone communication when booking direct, so GetYourGuide and Viator are convenient ways to avoid all that hassle.

One of the most popular tours is this day tour on GetYourGuide, with more than 1200 reviews. This is the tour most of our readers have chosen, and is the tour we would select today. Our trip was now several years ago, and at the time we took the Special Panmunjom Tour by Panmunjeom Travel Center which does not visit the tunnels but goes to Odu Observatory and the JSA. This tour offered the chance to speak with a North Korean refugee (defector). This allowed us to learn about how people escape the North, how they adapt to life afterwards, and what knowledge they have of the outside world living in North Korea.

Here are some of the top-rated tours that can be booked online: 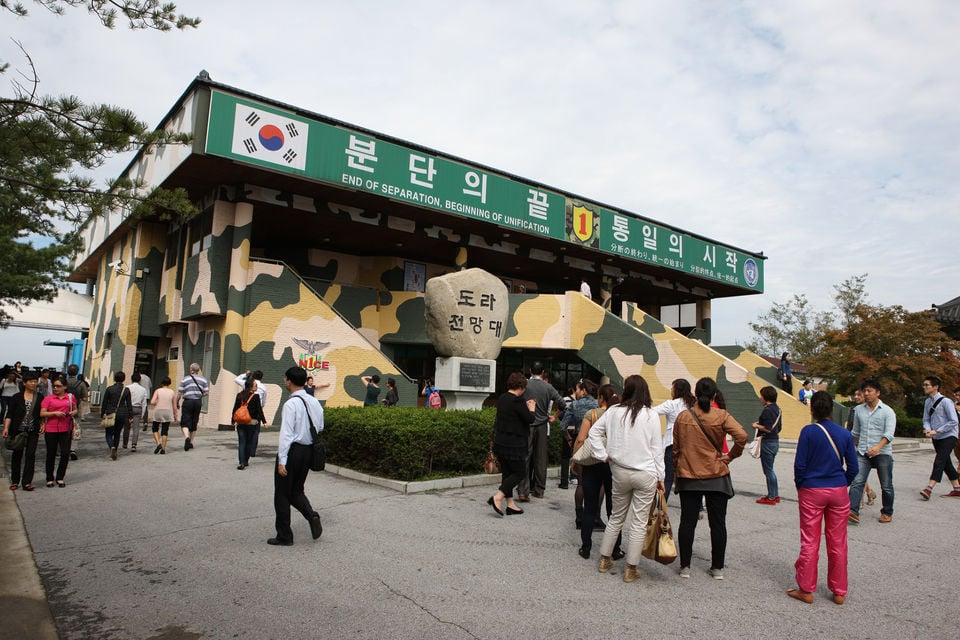 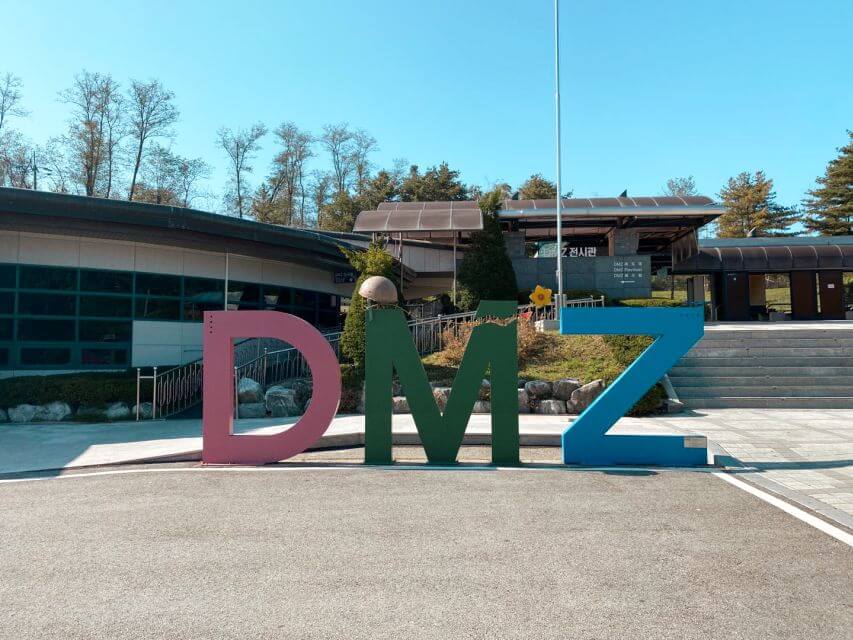 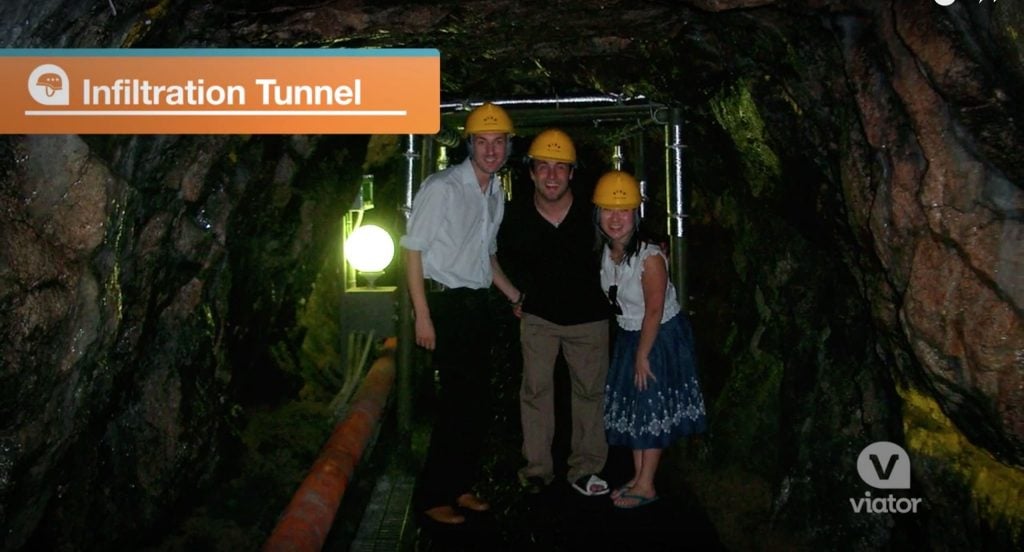 DMZ Past and Present: Korean Demilitarized Zone Tour from Seoul

Much of the road towards the JSA border runs parallel to the Han River, which separates the two countries. It's nothing short of unique to be sitting in a bus with views of North Korea passing by out your window.

The binoculars at the Dora and Odu observatory provide ultra zoomed views of North Korea. One can even see North Korean civilians walking around on the other side, as we did during our visit at Odu . At Dora Observatory, North Korea's fake town, Kijong-dong, is viewed.

On a tension-free day at the JSA, one can legally take a step into North Korea. But how and why?

The blue buildings pictured below are UN Command neutral zones. Midway, the inside of these blue buildings cross the North/South Korea border. Inside the building on the right (UNCMAC) is where meetings between the two countries are housed.

If you want photo evidence that you physically stood in North Korea, this can be done. You can pose with a South Korean soldier within North Korea at the back of the UNCMAC room. Be warned though (and you will be), if you cross through the door behind you, no one is responsible for your safety as you'll be alone and in North Korea.

Partaking in the DMZ tour allows yourself to gain much more depth on a humanitarian crisis that the world does not know enough about. If you have the chance to do this trip, I'd highly recommend it.

The easiest way to book a tour with instant confirmation and reviews is online at GetYourGuide and Viator. One of the most popular tours is this day tour on GetYourGuide, with more than 1200 reviews. Alternatively, you can contact one of the tour companies below directly and book with them.

Panmunjeom Travel Center
Website: www.panmunjomtour.com
Telephone: +82-2-771-5593 (Korean, English, Japanese)
Price: 80,000-77,000 won (~$60-$77 USD). All tours include lunch.
Note: Tours offered in Korean, English, and Japanese. This is the only company that allows you to meet a North Korean defector/refugee, ask them questions, and better understand the human rights issues of North Korea.

Type to search or hit ESC to close
See all results