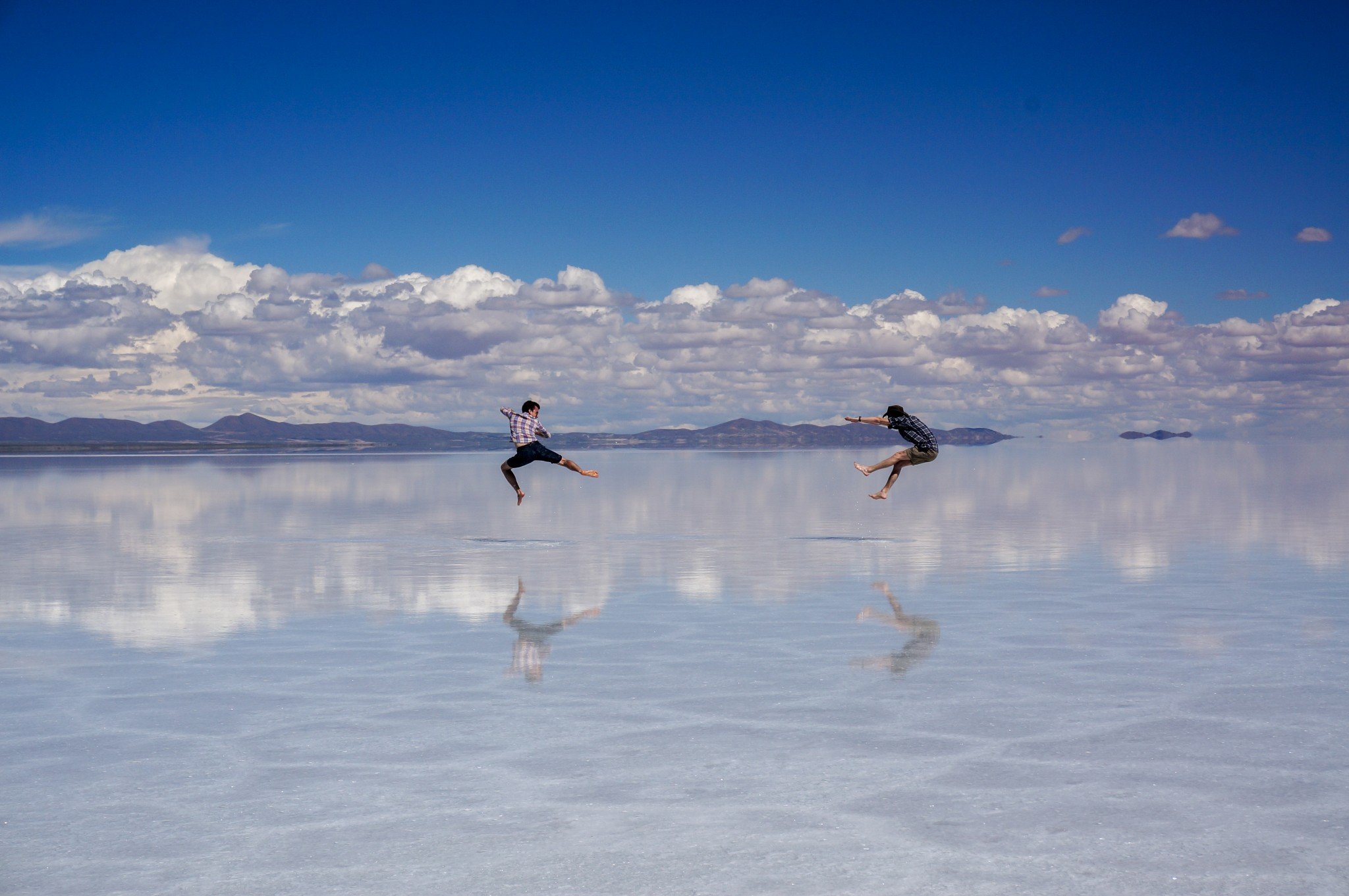 Haters Gonna Hate: 8 Things People Will Say When You Decide to Long-Term Travel 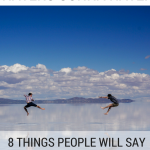 When you first begin flirting with the idea of a big trip, the excitement is electrifying. Every unoccupied moment is filled with travel imaginings – skydiving foreign horizons, snorkelling with majestic marine life, and discovering yourself in moments like these.

When you decide to take the leap

So, you're ready. At least, you think you're ready. You're certain about dropping it all to travel. Better now than never ….right? I think so. Should I have really just quit my job just now? And sold all my stuff? ALL of it?! Farrrrrrrrrk.

When you finally commit to making the plunge, you will waver in uncertainty. It's normal. But some people will pick at your wounds of self-doubt. What this means is rather than receiving a heartfelt “CONGRATULATIONS!!!” from every person you share your news with, you may be met with any of these 8 skeptical queries instead.

Followed by many false assumptions about how you can afford it and they can't.

It's fine – I get it. Heck, the very inspiration behind our blog is showing people how travel can be affordable because it's such a concrete false belief that most people can't. But let's be real, when some people ask this, they're just being nosey.

That being said, you could take the opportunity to explain how several countries can be seen thoroughly on a month's rent, or that there's infinite ways to save up money from home besides working (such as being more frugal with food, couponing, renting your home on AirBNB, selling your possessions, and changing your travel attitude to name a few!). Share a little insight if you can – who knows, maybe you'll inspire a curious skeptic.

People who ask this are likely questioning whether you will get another job or just come home and be an unemployed bum for life. You need to think beyond the concept that the job you have now is the only one you'll ever have.

There's nothing wrong with assuming (or wanting!) to return to your old job after travel, or being worried about finding a new one in the future. But clinging to those fears, not travelling, and clutching one position 'till you're whisked away in a casket is not only depressing, it's limiting your potential.

Quitting your job is one of the scariest, but most liberating things you'll ever do. In some ways, it's like an early retirement – you suddenly have free time to read, dabble in hobbies you've lusted over – oh, and SEE THE WORLD. You'll likely be surprised by the new skills and networking you'll gain from travel, and who knows, you may never go back to that dream job you once had anyway. I didn't.

In other words: shouldn't you grow up like the rest of us?

If travel is on your heart, do it.

Unless you have some major debts to pay off (but even if you do), it's erroneous to think that staying home longer and piling on more commitments will make travel an easier pursuit. It won't. The less strings you have, the better.

Could buying a house and subletting it be a great opportunity to fund your travels? Potentially, yes. Can't you travel with kids? Definitely! But you need to consider if these commitments will truthfully prevent or promote your likelihood to travel. And when evaluating such decisions, be honest with yourself.

4. “Geez, you're really going to sell all your stuff?”

Even the things people got for your wedding – isn't that selfish? (A co-worker seriously asked me this). Yep, it is. You've got to be selfish to create your own life path.

Now, people have an uncanny attachment to their stuff. And as you post things for sale, they'll project their attachment to stuff onto you. “Oh my gosh, you're getting rid of that? You CAN'T!”. Oh, but I assure you, YOU CAN. And you should!

Selling your belongings is one of the best ways to fund your travels. If you research your prices, take great photos, and post it on various selling platforms, you can have a very high profit margin. We've sold everything we owned twice now and walked away with a nice chunk of change each time ($6,500 on our first go – not including another $5,000 our car). Not to mention, a lot of people and charities will inherit possessions that would otherwise collect dust, depreciate in value, and go completely unused.

This can be the most tiring statement to hear. It will make you want to say: I once said that too. But look at me, I'm doing it now!

Amidst your rising frustrations, you should respond to this sensitively. In theory yes, most people can travel, but be considerate towards those who likely won't or don't genuinely share your dream. Not everyone will travel. And that's okay. We need people to run the buses we take, the planes we fly, and the hotels we sleep in!

However, if you're hearing this from someone who's actually interested in travel, BEHOLD: this is your evangelical moment to shine. Preach the good word of how feasible travel can be! Because the reality is this: retired people, students, families, and those who are wheelchair-bound, vegan, broke, solo, and well-paid business professionals ALL travel. With a can-do attitude, just about anyone can do it!

I understand the “what about your family?!” question if someone close is ill or dependent, but aside from that, your family should support you pursuing a major life dream. Still, I appreciate that that is nothing but a BIG fat should.

We are lucky that our families support our decision to long-term travel. It doesn't make the distance any easier though. One thing that does help is that travelling in the 21st century means it's never been easier to keep in touch. Tools like Skype, Snapchat, Instagram, Facebook, What's App, and e-mail allow daily contact if you so wish!

A surprising outcome of our own travels was that it inspired my family to travel internationally for the first time. Don't underestimate the impact your adventures could have on others! 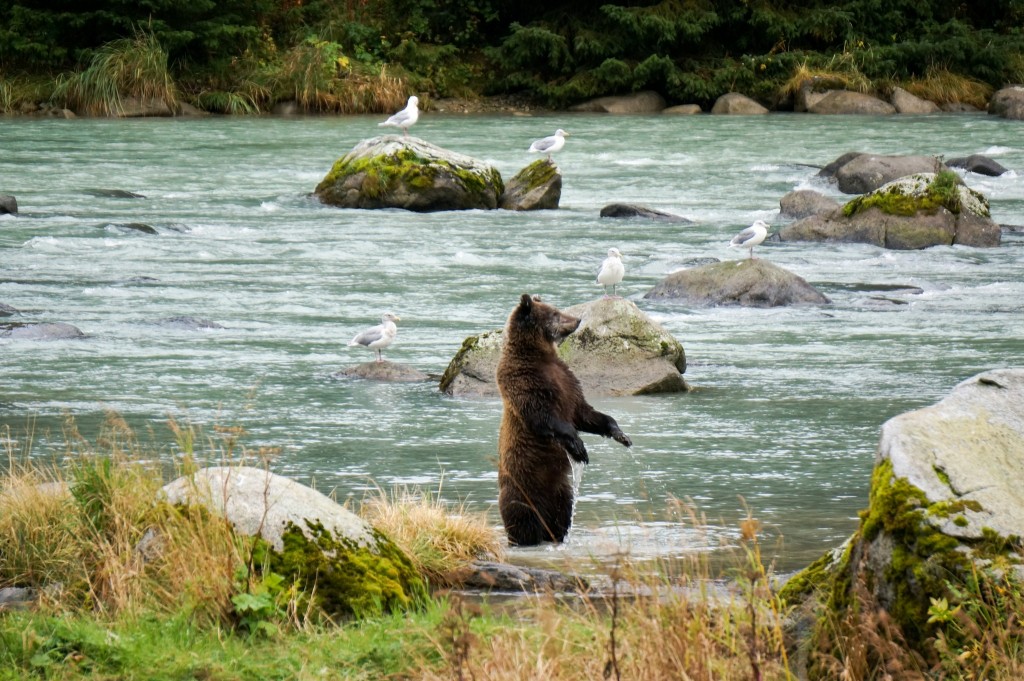 Committing to a long-term trip will make you realize that MANY people are afraid of the big, bad world. Don't allow their worries make you fear it, too.

Bad things can happen anywhere. Many of the world's sporadic, violent crimes happen in the places where these fearful worriers abide. Despite this, you will often be subject to erratic news stories and freak accidents involving travellers. “Did you hear that one tourist who…”, “Oh my friend went there and got MUGGED!”, and so on.

Ahem – SPOILER ALERT: the world is not as scary as most people think. There are adorable elderly people wandering city parks, children playing unsupervised outdoors, women walking streets alone after dark in virtually every city on earth. With the exception of a few war-torn, violent places – the rest of the world is truly not too dissimilar from the one we already know.

Tourists are rarely the victims of dangerous crimes. At the end of the day, don't let people's fears discourage you. A good head on your shoulders & simple awareness is all you really need to see the world safely!

Why travel? Because you're healthy, unattached, life's too short, your wanderlist is too long, 2-week vacations suck, travel in retirement is not the same as how you'll travel now – oh and BECAUSE YOU CAN.

No matter how much inspiration you spew in the way of doubters, some people just won't ever get why you want to travel, period. Unless your upcoming plans involve some kind of degree, award, achievement, or promotion attached to it, many will ALWAYS wonder why you're not doing something else “more important”.

So, to say the least, people's reactions to your decision to long-term travel will be interesting. Mostly though, the majority will share happiness over your epic adventure. As for yourself, one thing will remain certain about your plan to globetrot, and it is this: you will never regret it. 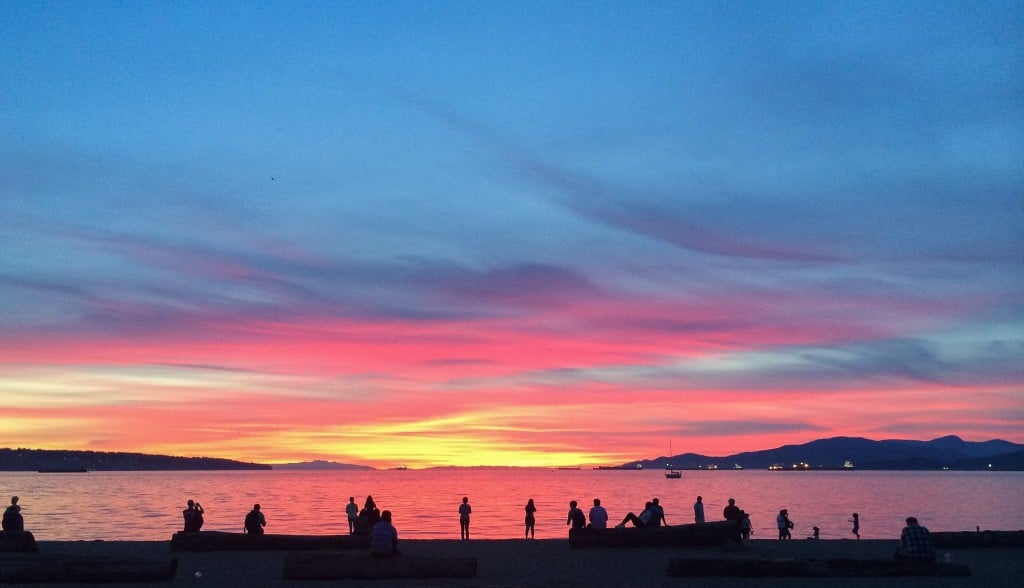